Sweers Island has a long and fascinating history. The first visitors to these shores were most likely the Kaiadilt Aboriginal People who travelled from mainland Australia to live on nearby Bentinck Island. Stone Fishtraps date back to early Aboriginal occupation. Macassan fishermen also visited the islands from Sulawesi in the 17/1800s, in search of beche-de-mer (Trepang/Sea Cucumber); leaving stone fireplaces, pottery and Tamarind trees as evidence of their regular visits.
The first European to sight the island was most likely the Dutch explorer Abel Tasman in 1644, who thought the island was a headland attached to the Gulf mainland. He named the channel between Sweers and Bentinck 'Maet Suykers River' after a member of the Council of Batavia who had authorised his expedition.
When Flinders arrived approx. 200 years later in 1802, he found that the headland was in fact an island, and as there already was a 'Maet Suykers Island', he named it 'Sweers Island' after another member of the Council - Salomon Sweers. Flinders spent almost a fortnight here recaulking his ship and surveying the island. He dug a well and marked a tree with the name of his ship 'Investigator'. The tree is now in the Mapping & Survey Museum in Brisbane. 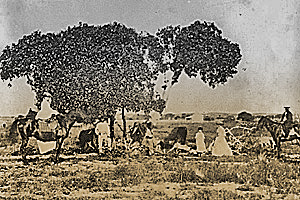 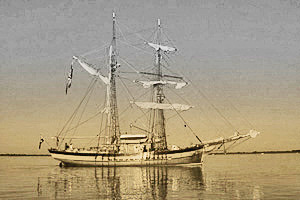 On the left, The Landsborough and Sandrock families picnic around 1867 under the Investigator Tree, on which Matthew Flinders carved the name of his ship 'Investigator' (photo courtesy: John Oxley Library, State Library of Queensland.)
On the right is the Tall Ship 'Windeward Bound' skippered by Capt. Sarah Parry whilst anchored here in 2002 in the same spot as Flinders did 200 years earlier.

The next visitor was John Lort Stokes in the 'Beagle' in 1841. He also dug a well which is probably one of those in use by the Resort today. Next to arrive were the members of the North Australian Expedition in 1856. They were followed in 1861 by 'HMCS Victoria' and its tender 'Firefly' who were searching for missing explorers Burke and Wills. One of the crew died and is buried here.
In 1866 malaria hit Burketown, so the administrator William Landsborough decided to move the survivors to Sweers Island. His daughter Sweersena was born on the island and is documented as being the first non-Aboriginal child to be born in the north of Australia. Landsborough established a settlement known as Carnarvon, which survived until approximately 1872. The remains of the paddlesteamer 'Pioneer' which serviced the town lie on the beach near the resort. The wreck of the Brig 'Governor' lies offshore. Although no buildings remain, there are sheets of iron, broken bottles and crockery, and two marked graves.
Most of the residents moved to establish Normanton but the Customs House remained until 1884 and the Creffield family and others ran sheep, cattle & goats until the turn of the century. Except for a lime burning operation from 1915 until 1922, the island was virtually uninhabited until the Resort was established in 1987. 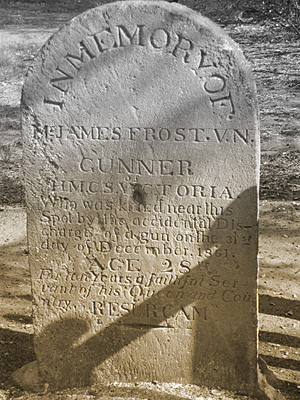 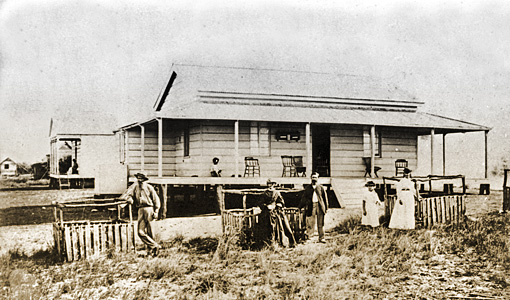 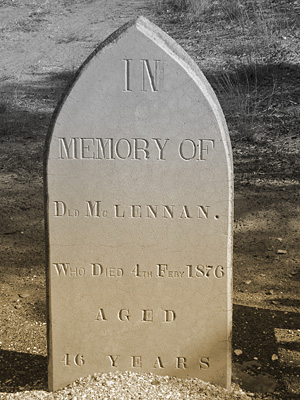 On the left is the grave of Gunner James Frost of HMCS 'Victoria' which had a depot on the island while searching for Burke & Wills. He was accidentally killed in 1861 while cleaning his gun.
On the right is the grave of Donald McLennan, who was a publican in Carnarvon and died of a liver complaint in 1876. In the centre is the Customs House with the Landsborough and Sandrock families.

For many years, people have asked us: "Who is the island named after?" We didn't really know. Just that it was someone named "Sweers" who worked for the Dutch United East India Company (VOC). But in October 2004 we made contact with his descendants in Norway and the Netherlands, and together with historian friend Bob Forsyth in Mount Isa, we have written a book detailing the history of the island relating to Salomon Sweers. (More Details below.)

Prof. Peter Saenger has been visiting the island since 1973. He has written the original "Sweers Island History Notes" and the paper "Sweers Island: changes over two hundred years since Flinders' visit". If you are interested in history you will enjoy these articles. (More Details below.)

In 1996, the Australian Geographic Society commissioned a story on Sweers Island. Their Photographer of the Year, Bill Bachman, travelled to the island to take the wonderful photographs featured in the article which appeared in 1998 in Issue 49 of the AG Society Journal. The publication is long out of print, and the Society has kindly granted permission for us to reproduce it here for you to read. (More Details below.)

In 2002, the Royal Geographical Society of Queensland visited the island as part of a major study to commemorate the 1802 voyage of Matthew Flinders. There were scientists from various fields of study, and their various reports were compiled into a book which can be purchased from the Society. (More Details below.)

Read about the book 'Sweers Islands Unveiled', which explains who Salomon Sweers was, and how the Dutch put Australia on the map before Captain Cook was even born!

Download a copy of the Australian Geographic Society article on Sweers Island.

Visit the website of the Royal Geographical Society of Queensland website for info on their 2002 Scientific Study.

Visit the website of the Tall Ship 'Windeward Bound' which you can join as crew, and experience what sailing would have been like for sailors in the 1800s.

(Thanks Ahmad, for the cute round icons!)

IMPORTANT INFORMATION! PLEASE ENSURE YOU READ THIS BEFORE YOU TRAVEL!